The mission of the Black Heritage Gallery is to lead a diverse audience in discovering African-American artist and to nurture artists at all stages of their careers.

The Black Heritage Gallery, a project of Black Heritage Festival of Louisiana, opened on June 28, 2001 with a grant from the Junior League of Lake Charles, Inc.  The opening exhibit honored the legends of the national Negro leagues and the hometown heroes of Southwest Louisiana.  Located in historic Central School, the gallery is among the 26 initial sites on Louisiana’s African – American Heritage Trail that was announced by Lieutenant Governor Mitch Landrieu in February 2008.

Since its inception, the gallery has showcased emerging and mid-career artist at its original location in Central School Arts & Humanities Center.  In December 2019, the Gallery is projected to move into its new location at Historic City Hall Arts & Cultural Center.  There are six exhibits a year that hang for 7 weeks. A vision of Stella Miller and Frankie Lane, the gallery is the only institution dedicated to the arts and culture of African -Americans in Southwest Louisiana.

The Black Heritage Festival is an exempt nonprofit organization under section 501 (c) (3) of the Internal Revenue Code.  Black Heritage Gallery is a project of the Festival. 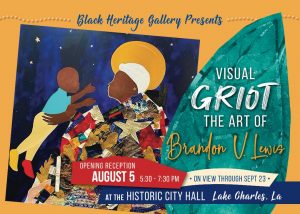